skip to main | skip to sidebar

A special bear is home again

A bear of my own to keep
Over the years I've often been asked if I have any bears of my own at home, any special favourites which I just had to keep.  The answer has always been no; for practical reasons it was my income so much as I would have liked, they had to find homes.  From a creative point of view I always wanted to make improvements and move on.  So, whilst I have my first and a few very early efforts, I haven't kept any others  at all.
Do I have favourites, well yes there are out there some bears which I always remember above the others; and for diplomatic reasons my lips are sealed on that.
Back in January 2018 I made a small 6 jointed black bear, I gave him a white chest and a little white tip on his tail.   By then my old Newfie, Angus was quite frail and for some time had wanted no more than to spend his days and nights beside me; he stayed with me snoozing while I made bears and because I had given the little bear a white patch and tail just like Angus, I called him Angus and took their pictures together, under my desk where old Angus spent his time. 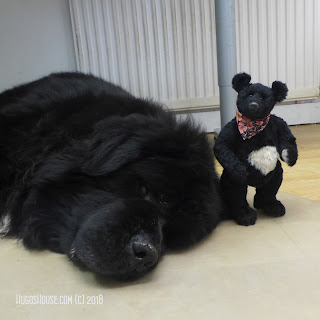 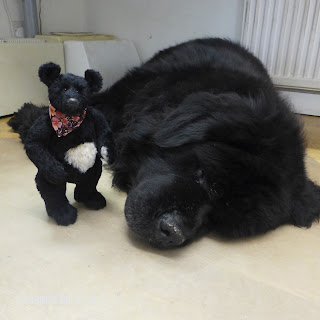 I listed little Angus on my website and he quickly found a home with a collector who had a number of my bears, so I knew he went to a good home. 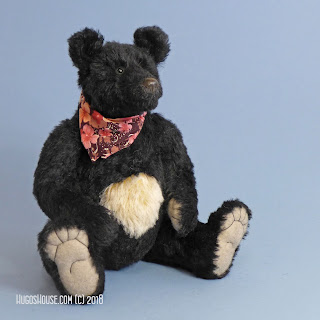 What I hadn't expected was that only two months later my own dear old friend Angus would pass away.  When I tried to go and do any work all I could think of was that he wasn't beside me as I sewed and stuffed and I just couldn't find the heart to do very much.
Anyway, a while ago, I noticed that the collector was thinning her collection, and I contacted her and asked that if she ever thought of selling Angus to please let me know.
I had missed him and after Angus death I regretted selling him; I shouldn't have given him the same name and I couldn't forget how much those pictures somehow tied into the memory of my old dog who in his later life never wanted more than to be beside me.
A few weeks ago I received the message that the bear was to be sold and so he came home.
So, now I have a recent bear to represent my work in my own home, chosen by fate because in my mind he is so closely associated with Angus my special old Newfie pal.
He sits on the shelf above my work desk now, I still miss canine company when I work, Gaspard always wants to be close but I'm afraid he hasn't learned to ignore all the exciting things on the work top so has to stay out.  I'm retired from full time work now though so I only spend a couple of hours a day in there  anyway. 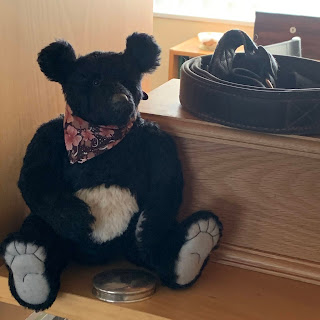 Last picture is of them together again; Angus' ashes with his collars and the little silver box which contains some of the white hairs from  the end of his tail.
Posted by Gregory Gyllenship at 07:45

Gregory Gyllenship
Surrey, United Kingdom
I have been designing and making Teddy bears since 1992. My original inspiration was the classic German Teddy with long elegantly tapered arms, a humped back and pronounced snout. Through the years I evolved different styles and enjoy the challenge of making a bear with a strong scuptural shape and substance, sometimes with bold colours and contrasts. Whatever the style of bear I make it is important to me to recall the origin of the Teddy Bear as a gentle creature of cloth and felt and needlework, so even a large grisly bear will always be a Teddy Bear at heart. I still very much enjoy the challenge of capturing the spirit and style of those early bears too and constantly revise patterns and details as an ongoing creative process.